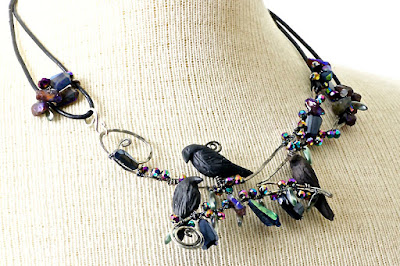 Crows have always been the kings of cool in the bird world. With this in mind, I am proudly offering the Murder of Crows class at BABE (Bay Area Bead Extravaganza ). I will also be exhibiting there on Saturday and Sunday Nov 12 & 13th.

When I was a little girl I went to a Catholic grade school.  Every morning the nuns would line us up by classroom in the parking lot when the first bell of the morning rang and then we were to stand and wait until our class was called signaling us to  march into the school in an orderly single file line.
This is pretty much what we did since nobody wanted to incur the wrath of a nun.

The only problem was when George the crow showed up, which he would do unannounced, from time to time.  George had been cared for as a young bird by the animal shelter which was across the street from from our school.  The story was he had been brought there injured, nursed back to heath by the staff and as a result he liked the snacks the continued to feed him and he hung around on a regular basis.

George also liked shiny things like metal lunch boxes and sliver barrettes and those elastic hair ties with big plastic balls at either end.  And out of the blue, literally, George would appear and peck at all these fancy things that came attached to the nice children in their proper lines, which in turn would cause us to scream and run in all directions despite our fear of the nuns.  The nuns were no match for George.

It was also rumored that George had picked up the ability to talk and mimicked the salty language of the men who worked at animal control. Although I never herd this personally the playground was full of boys scolded by nuns  who claimed  that they were only repeating what they heard from the crow.

check out my Etsy store

You don't have to drive your car. Shop from the comfort of your home! 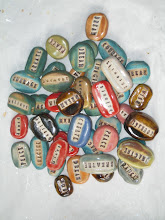